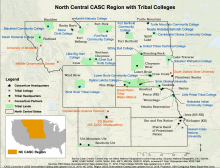 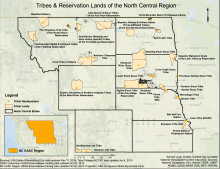 select a thumbnail to view
Body

Tribal nations are priority science partners of the North Central Climate Adaptation Science Center (NC CASC). Tribal nations are distinct partners as their connection to the environment is often thousands of years old. The NC CASC is committed to working with tribal partners to create usable, useful, and relevant science to address a changing environment. The Center aims to support tribal climate adaptation by providing relevant and useful science, such as:

To better understand, support and facilitate climate resilience in tribal communities, the NC CASC partners with the Great Plains Tribal Water Alliance (GPTWA) to host a regional Tribal Resilience Liaison. This position is funded by the Bureau of Indian Affairs (BIA) Tribal Resilience Program which created the position in various regions throughout the U.S. The North Central Liaison:

The GPTWA also plays a role as an NC CASC consortium partner to build tribal resilience to climate change through network building and facilitating information exchange in the region. GPTWA’s representative plays a key role in focusing the NC CASC mission to serve tribal nations with an emphasis on water and other resources critical to the cultural, physical, and mental health of tribal nations. 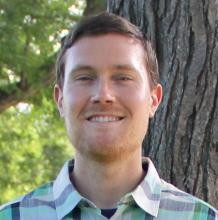 Ensuring that tribal nations and communities in our region have the scientific information and expertise they need is a high priority of the North Central Climate Adaptation Science Center (NC CASC). Stefan Tangen serves as the center’s Tribal Resilience Liaison, with the goal of understanding tribal needs, connecting tribes to federal and other science resources, and fostering dialogue among tribal partners about adapting to a changing climate.

Stefan received a Master of Natural Resources Management from the University of Alaska, Fairbanks with a focus on climate adaptation science and planning with indigenous communities. In Alaska, Stefan worked with several Alaska Native communities including the community of Shaktoolik where he partnered with the Tribal Council to understand perceptions of success among groups involved in Shaktoolik’s recent climate adaptation process to highlight best practices for planning with rural, indigenous communities in the state.

While Stefan works directly with the staff at the NC CASC, he is employed by the Great Plains Tribal Water Alliance (GPTWA), an inter-tribal organization dedicated to ensuring clean and abundant water for the people of the Great Sioux Nation now and for generations to come.

Are you interested in a graduate degree exploring how climate may impact natural and cultural resources and resilience?

The North Central Climate Adaptation Science Center is seeking applications from students affiliated with the 31 federally recognized tribes in the North Central region (North Dakota, South Dakota, Nebraska, Kansas, Montana, Wyoming, or Colorado) who are interested in completing a Master's degree at the University of Colorado Boulder on a topic related to climate adaptation science. Full funding is available for a two-year Master's program for up to 5 eligible students between fall 2020 and 2022. Details about the program, eligibility and the application process can be found here.