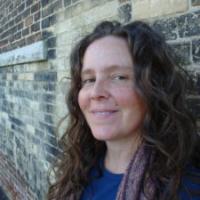 Shelley Crausbay (she/her) is a plant community ecologist, ecological modeler, and paleoecologist. Her research focuses on triggers of ecological state changes, climate drivers of vegetation patterns and dynamics, and the role of disturbance within a changing climate context. She gathers evidence across both modern and paleolandscapes and has worked in complex mountainous regions of the western US, as well as Southeast Asia, the Caribbean, Hawaiʻi, and Guam. Shelley is most interested in linking science to action and she uses ecological models to foster proactive management strategies that address ecological responses to our swiftly changing environment.

Shelley grew up in Texas on the edge of the Llano Estacado, one of North America’s largest mesas, in a cotton-farming family dependent on rain. Since then, water has been a persistent theme in her life, as she has gone on to work in some of the wettest forests on Earth. Shelley established one of only a few tropical montane climate networks in the world, to study the role of drought in montane cloud forests, and her research has shown that water organizes ecological patterns even in very wet environments. Shelley has most recently worked with drought planners in soutwestern Montana to build management strategies for reducing vulnerability to ecological drought and to include water for the environment when planning for future water needs.

Shelley has an undergraduate degree in architecture and loves black-and-white photography. She is a Consortium Partner PI for the North Central Climate Adaptation Science Center and affiliated with Earth Lab at CU-Boulder.